Here’s a comprehensive guide to the Irish tin whistle (penny whistle) terminology, definitions, and idioms. This tin whistle dictionary contains plenty of helpful stuff to get familiar with the standard naming, especially if you are a beginner and just started learning the instrument. Or, if you come across tin whistle community discussions on the web and are not quite sure about specific terms, this is the right place.

If there’s a missing phrase or any confusion, do not hesitate to contact us, and we would be glad to explain, clarify, and add it to the article.

This section is all about tin whistle physical parts and the way the instrument is constructed, with all typical variations. It explains how the tin whistle sound is produced and other important things to have in mind.

It’s the tin whistle’s main body, a pipe having six holes, and can be made of various materials such as brass, nickel, aluminum, copper, different metal alloys, plastic, wood, etc.

Although some sources reference it as the same thing as the body (tube), the bore can be best defined as the whistle body’s inner diameter. You may come across the phrases such as “conical (or tapered) bore”, which means that the body diameter shrinks as you look at the whistle from top to bottom. A widespread example of a conical bore tin whistle is the Clarke brand. Also, a wider bore usually means more volume. Therefore a good example is Waltons Mellow D whistle. A slightly wider bore brings more loudness compared to other entry-level whistles such as Generations, or Feadogs, for instance.

The mouthpiece is also known as the “whistle head”, and as the name suggests, it’s the top part of the whistle going into the mouth while playing. It’s usually made of durable plastic such as ABS, delrin, etc. It can be made as a completely separate part of the body, such as the case with brands like Waltons, Feadog, Generation, Dixon Trad model, and more. Other brands make the head physically attached to the body as a single, undetachable part. There are several examples, such as Goldie, Susato, Dixon plastic models.

The fipple is a part of the mouthpiece, a block plugged into its cavity, creating the “windway”. It’s a crucial part responsible for air requirements and playing capability. It can be of the same material as the mouthpiece or body (i.e., Goldie, Susato, Walton, etc.), but it’s common to be of a different material as well, such as with Burke, Clarke, Sindth, MacManus, and others.

The blade is the sharp part at the end of the mouthpiece window, where the sound originates, not where you blow. Air that you blow through the windway hits the “blade“, causing vibrations and producing the sound. The blade should be very smooth and polished, as even trivial damage to it significantly affects the sound quality.

It is the part, or better said, the place where a tin whistle can split into two separate elements to adjust the pitch and get it in tune with other instruments. Whistles constructed this way are considered “tuneable” while the single-piece models that can’t be split are called “non-tunable”. Many whistles are tunable by detaching the mouthpiece from the body, such as Waltons, Feadogs, Generations, Dixon Trad, etc. Other tunable whistles are constructed a bit differently, where the tuning slide is placed on the body itself, between the holes and the mouthpiece. Examples of such whistles are Goldies, Susatos, Dixon DX005, Burke.

Everyone agrees it’s hard to describe the whistle sound until you can actually hear it. And while it may be entirely subjective, the common naming exists and may help one think about the sound described with the words as closely as possible. It’s also worth mentioning that the whistle sound isn’t strictly described as one thing or another. It’s rather a combination of several characteristics to a certain extent.

When it says that the sound is airy, it usually means that you can hear the air “escaping” as an addition to the original tone. Opposite to airy would probably be a clear-sounding whistle. An excellent example of an airy whistle is Clarke, while most of the low whistles tend to be airy in general as well.

It generally means that the tin whistle has a bit of sharpness added to the original sound, as an initial accent. We would say that the chiffy means “less soft” or “less rounded”, making notes a bit more accented when playing. If the whistle is too chiffy, it may be considered a squeaky whistle. In most cases, lower notes on a whistle are less chiffy than higher ones. Good examples of chiffy whistles are Generations, Feadogs, some of the wooden whistles, etc.

A rich-sounding whistle means it has lots of small sound bits and nuances added to the original tone. Sometimes it’s a little bit of air, or chiff, or more vibrating sound. You may want to think of Irish flutes as rich-sounding and textured instruments. Wooden whistles such as MacManus are unquestionably rich-sounding, and many aluminum whistles have the texture too, for example, Goldies, Chieftains, and some of the Dixon models.

Crispy has a relatively similar meaning to chiffy, but it is not the opposite of clear, rather opposite to soft. It generally means that notes are more responsive and accented. Thus the ornamentation is better heard when played. They are less lazy, more responsive. Plastic whistles such as Susatos and some Dixon models tend to be more crispy, Burke whistles too.

Sweetness is maybe a phrase hard to describe. However, you may want to think of a little bird singing as a sweet sound. Low whistles are less sweet than high whistles, and the Irish flute is not a sweet-sounding instrument either. If the tone is a bit tiny and at the same time rounded, not shrill, it’s balanced and can be considered sweet. All of the high whistles have more or less of a sweet sound. Good examples are Dixon Trad, Dixon DX005, Susatos, Burkes, Sindth.

By definition, the tin whistle key represents the major diatonic scale of 7 notes that the whistle can play. It means that the whistle in the Key of D is supposed to play the D major scale. Whistle in the key of C is expected to play the C scale, and so on. In Irish traditional music, D is the most common key, followed by the C key. But some makers and brands are offering many other keys too.

Tin whistles in the key of C and above (i.e., C, D, Eb, E, F, G) are considered high whistles (or soprano whistles). Below the key of C, starting with B, Bb, A & G are considered alto (or mid-range) whistles. Whistles beginning from the lower F key and below (F, Eb, D, C) are considered low whistles. And some brands make so-called bass whistles, which fall into the range below the low C (i.e., Bb, A, G).

It’s not strictly related to tin whistle but is more of a musical theory definition. Octave is a set of 12 consecutive different notes range. The tin whistle as an instrument has a reach of two octaves, usually named lower and upper. Each octave has a scale that consists of 7 notes representing a major diatonic scale.

The bell note is the lowest note on the tin whistle, which you get by covering all six holes with your fingers. It matches the whistle-specific key, which means that the bell-note is the D note on a key of D whistle.

Ornaments are note decorations, embellishments of a melody. There are various standard ornamentation techniques typical for Irish traditional music. Ornamentation is described in more detail inside the tin whistle lessons section of the website, such as cuts, taps, rolls, slides, vibrato…

Half-holing is a technique where you cover half of the hole with your finger to play the semi-tone, the note that doesn’t naturally belong to the current whistle key. For example, if you half-hole the G note, you will get a note that is one semi-tone above the G. And that is A flat (Ab or G# ).

It’s a tin whistle holding technique that comes from uilleann piping and is typical for playing low whistles. The whistle body’s length requires stretching the fingers and slightly rotating the palms to reach and cover the holes adequately by using the finger pads, not the tips.

It’s the indicator of air amount that the whistle “keeps” when you blow. In general, when it says that a tin whistle has high backpressure, it usually requires more push when blowing, but it doesn’t waste a lot of air. Quite the contrary, an easy-blowing tin whistle usually has low backpressure and will take the air fast, causing you to take a breath more frequently. Most of the entry-level whistles are easy blowers and have low backpressure.

Breath condensation and saliva can create water drops inside the mouthpiece, which causes the whistle to “clog” and produce a squeaky or muffled sound. The rule of thumb is that whistles with the narrow windway clog more frequently. An article about tin whistle maintenance explains how to get rid of the clogging in more detail.

It’s the process (chemical reaction) of losing shine and revealing stains across the whistle body, especially around the holes. It mostly happens on brass and copper whistles.

Tabs are diagrams showing the finger positions on the tin whistle, representing the notes that complement a tune or a song. They usually come with sheet music that helps with the duration/length of the notes. You can find more than a thousand tin whistle tabs here on the website.

The best synonyms for these terms you may hear from classical musicians as staccato and legato. Tonguing means that you play the notes by accenting them with your tongue, which usually sounds more rhythmical. Slurring is playing in a more relaxed manner without using the tongue, which makes the notes sound more connected. 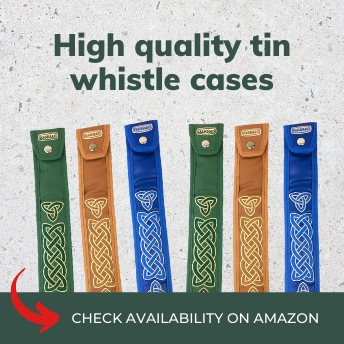 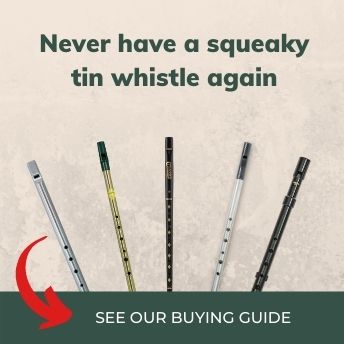