In this lesson, we’ll learn how to do one of the most characteristic tin whistle (penny whistle) ornaments in Irish traditional music, which we call the “roll”. Unlike other standalone decorations that we learned in the previous lessons, a roll is a bit different. It’s a more complex decoration, made of a combination of ornaments.

How to do rolls on a tin whistle correctly?

As we just mentioned, a roll is a slightly advanced, composite ornament. It consists of two different ornaments. A cut and a tap. And if you didn’t go through the lessons that explain cuts and taps, please make sure to check them out as we won’t get into details again. So, here are the basics on how to do a tin whistle roll in 3 steps:

It’s worth mentioning that what we explained above is typically called a “long roll”. It means that it consists of 3 notes. You may also come across the term “short roll”, which is basically the same ornament. The only difference is that the first plain note is not played at all. So, in a short roll, you play two notes, by starting with a cut and then tapping the second one.

When to use rolls in a tune?

If you are into playing tunes by reading sheet music, whenever you see three or two repeated notes of the same length is probably a good place to use a roll. These are usually 2 or 3 eighth notes in jigs and reels, but also dotted quarter notes, which have the same length as 3 eighth notes. So, instead of a dotted quarter note, you can play a long roll. Or, instead of a quarter note, you can play a short roll.

If you learn to play by ear, then you will have to figure it out yourself. Usually, when you notice that you play two or three repeated notes of the same pitch, you can do rolls instead of tonguing.

Practicing rolls on a tin whistle

The same technique applies if you are into playing a low whistle or an Irish flute. The best advice is always to use a metronome, as the notes separated with a cut and a tap that are creating a roll should be evenly spaced as you would do when tonguing it. Also, as with other ornaments, make sure to practice at a slower tempo. It is slightly harder that way, but once you get the rolls into place, you will easily nail the fast tempo later. And while playing slowly, remember that cuts and taps should be performed very fast themselves. You don’t want to hear the audible musical notes, but the snappy ornaments.

As a beginner, do an exercise for long rolls as you’ll probably feel more confident to play a plain note first and then do the ornaments. Once you learn the long roll, you will figure out that you already learned the short roll too. Start with a scale from note E (as regular rolls cannot be achieved on a D note).

Again, arguably one of the greatest whistle players, Brian Finnegan. A fantastic set of reels, showcasing some pretty well-done rolls. 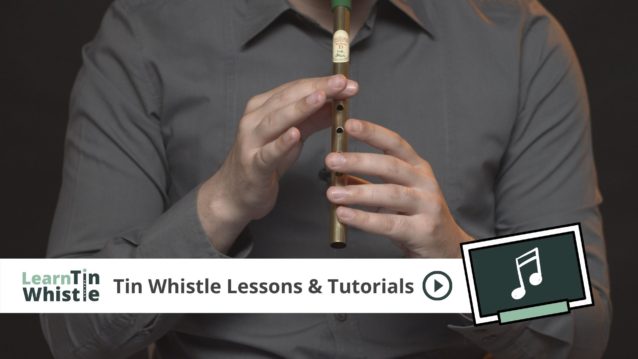